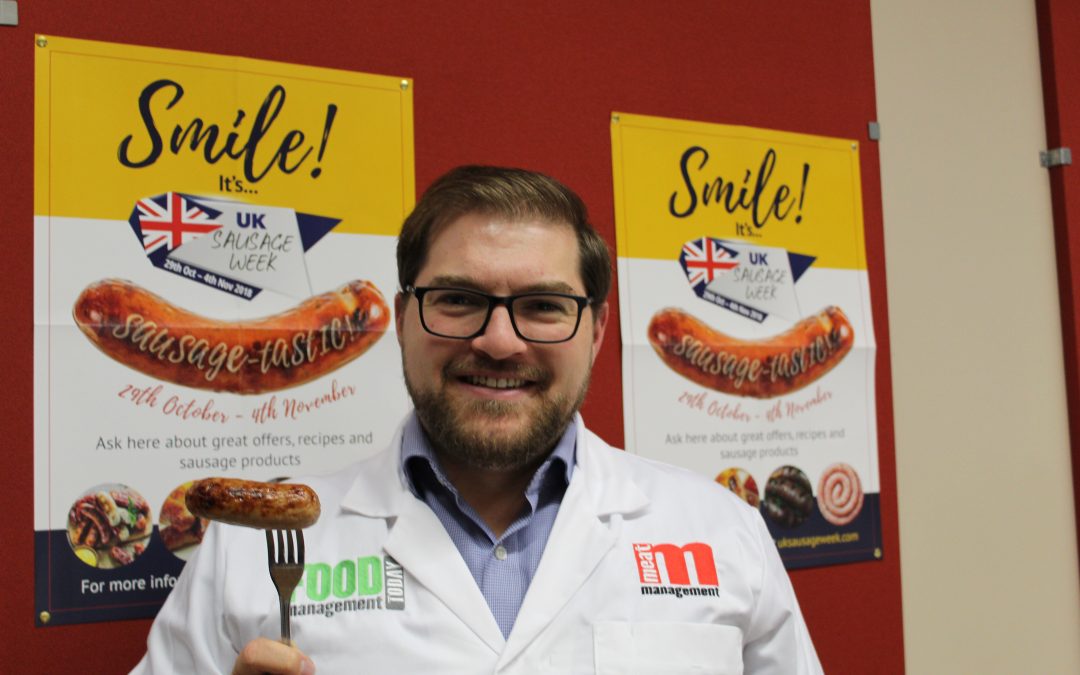 This year, organisers Meat Management magazine ran a special competition ahead of UK Sausage Week. Consumers across the country were invited to apply to become a Sausage Judge for the day.

Sausage fans across the land were asked to enter online, letting Meat Management know what they love about sausages and why UK Sausage Week is sausage-tastic!

A plethora of entries were received from people based all over the British Isles. Choosing the winner was no easy task but in the end the judges selected Tom Rouse from Leighton Buzzard, Bedfordshire.

Tom, aged 32, works in oil operations and lives with his fiancé Kathryn and their two pugs – Lenny and Derrick.

Tom will join the expert judging panel at the Regional Food Academy, Harper Adams University, later this month to taste and assess the bangers entered into UK Sausage Week’s industry awards and competition.

The judges said Tom’s application had the edge over others because he included his own poem dedicated to sausages:

Sausages and bangers, wursts and franks;
A substantial part of our history, these meaty snacks amount!
Pork or beef or chicken, lamb or kangaroo;
Spices, herbs and peppercorns; pink and black and blue!
With cheese or veg or sweet treats, variety is the key;
We all love a tasty sausage, so leave me one or two, or three!

When asked what he enjoys most about sausages, Tom replied: “I love food, particularly sausages – on their own or with mash, in a pie or a bun. Whether they are grilled, fried or barbecued, they optimise fantastic use of the whole animal, often mixing cheaper less glamorous cuts which is really important in this day and age of sustainability.”

Tom said he applied to become a sausage judge as it would be a dream come true for him.

He explained: “I would love to judge this competition – I think I am somewhat a connoisseur of the glorious sausage and the prospect of being amongst the best in the country is truly a dream.”

Head judge Keith Fisher, Institute of Meat CEO, interviewed Tom for the winning role. He said: “It was a real pleasure to speak to Tom ahead of the judging day. What he doesn’t know about sausages isn’t worth knowing. He may even have taught me a thing or two! We look forward to Tom joining us and working his way through 500 sausages with the team!”