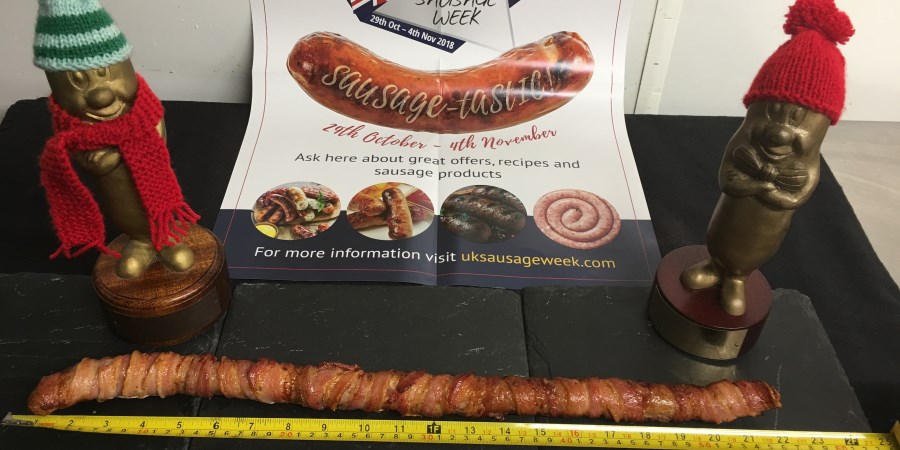 Vaughan Family Butchers in Cheshire has produced a 22 inch pig in blanket style sausage in celebration of UK Sausage Week and has launched a special competition.

Pigs in blankets are a Christmas favourite in the UK, and usually consist of a small chipolata wrapped in bacon as accompaniment to the festive dinner.

However, Steve Vaughan of Vaughan Butchers wanted to take the product to the next level after receiving many requests asking him to produce one just like the newly launched Aldi and Asda foot-long pigs in blankets.

Steve decided to take on the request and, to spice things up further, has also launched a competition running during UK Sausage Week asking members of the public to guess the weight of the 22” pig in blanket.

Whoever guesses correctly will win a chance to visit Vaughan Butchers and spend a morning in the shop making sausages!

“We’re also having a sausage morning on Saturday 3rd November where there will be a selection of up to 14 different sausages on offer,” Steve said.

“It’s a great way to celebrate UK Sausage Week. I’ve been a butcher for around 40 years, and I really believe that, with campaigns such as UK Sausage Week, you have to take the opportunity to promote yourself.

“I have been recognised in many places – even the hospital! I’m known as ‘Steve the sausage man’.

“I’ve been to multiple events over the years including food festivals and school visits – I think it’s so important to promote yourself. That is the key.”

The competition will end on 3rd November during the Vaughan’s sausage morning which will take place between 9am and 11am.