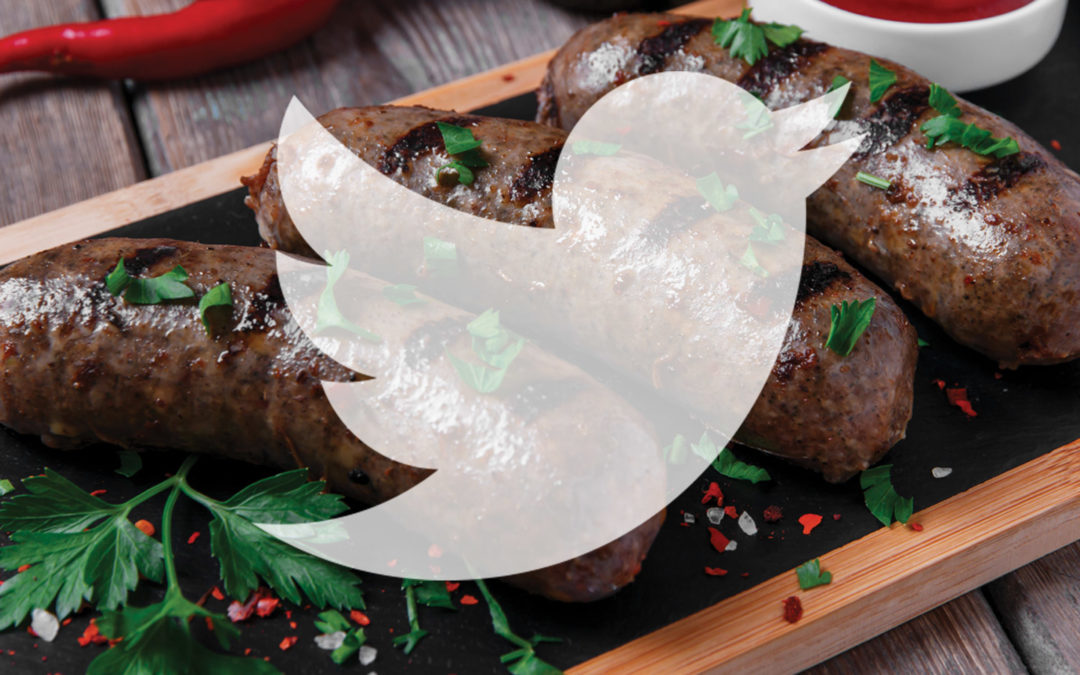 UK Sausage Week got off to a flying start and was trending on Twitter as the winners of the 2019 UK Sausage Week Awards celebrated at Butchers’ Hall.

Here is a round-up of some of the highlights on social media:

We shall share some attention now… It was Halloween after all…

HAPPY HALLOWEEN! ?Celebrate #Halloween AND #UKSausageWeek b y whipping up a batch of these spooky sausage mummy dippers: https://t.co/SgeFs1s6ne pic.twitter.com/PeDyDKXSTg

Here is one for statisticians:

Today is the official opening day of our Hall, what a better way to start lunch than with canapés from the UK Supreme Sausage Champion ?@Morgansbutchers @MeatManagement #uksausageweek #butchershall pic.twitter.com/1LoB5yk5Zd

It's #UKSausageWeek & #BonfireNight soon – so what better dish to share than our Catherine Wheel Toad In The Hole recipe? > https://t.co/cpGIs6s0pH pic.twitter.com/PiD1Psb5HB

Who said social media is not educational…

A contender for #UKBeefSausageWeek perhaps…

Its Sunday, and the last day of #UKSausageWeek So we have to finish the week with a British Classic. Beef & Horseradish sausage mix. It doesn't scrimp on flavour this one ?? & its available in the #glutenfree and #gourmet ranges #tasty #butchersblock #butchers @UKSausageWeek pic.twitter.com/Bb8btiBZcI

A favourite tweet so far is from Historic Environment Scotland. Definitely a real thing..

So we had a look in the archives to see if we could find anything for #UKSausageWeek (definitely a real thing) and it turns out yes! According to #Canmore, this carved man in a Paisley church is eating a sausage. Other interpretations may be available. https://t.co/LsbNKLvJim pic.twitter.com/6ZYkTQbTMj

UK Sausage Week connoisseur Alf Turner Butchers is doing a giveaway on its Twitter page. Sadly though, the giveaway does not include a dragon…

Ok to kick off #UKSausageWeek we are giving away a box full of our Bangers !
Simply RT and follow and tag a friend who will also win some sausages !! Competition closes Sunday at 5pm @UKSausageWeek #win #Competition #sausages are you in ? pic.twitter.com/uQtQ4YITsO

The first award winner of UK Sausage Week 2019 was Rothbury Butchers who got even more recognition later on when Morris Adamson, from the retailer got upgraded to first class on his way back to the North.

Ticket conductor saw our certificate so moved us up to 1st class #UKsausageWeek #normallyapeasant what a top bloke! Thank you @LNER pic.twitter.com/ZiClDVXT7y

Newitt’s of Thame is planning to create a revolution with its mini meals creation.

The Porky Black! ?
British Outdoor Bred Pork with Black Pudding and Apple and Runner Up in the #UKSausageWeek Best Supermarket Innovation Category.#Awards pic.twitter.com/9j1AsircOj

Have you joined in with the #UKSausageWeek celebrations yet?

If you buy your bangers at Dales this week, we'll donate 50p for each kilo sold to the See & Know Playgroup https://t.co/0MvYi2WOid #KirkbyLonsdale pic.twitter.com/pOBFEEkI4j

Talking of spooky we hope you followed DEVRO’s advice…

With #Halloween falling on #UKSausageWeek, there's only one costume everyone should be wearing today…#SausageCostume pic.twitter.com/BA8RE3IlCe

And finally, the survey says…

It’s time for another Big Banger Question. Results as always to be discussed on a future podcast. Pls email any related thoughts via https://t.co/sELDfVqcOk

What’s the best way to cook a sausage?

Looks like Vigars Game is excited for this week…

This website uses cookies to improve your experience while you navigate through the website. Out of these, the cookies that are categorized as necessary are stored on your browser as they are essential for the working of basic functionalities of the website. We also use third-party cookies that help us analyze and understand how you use this website. These cookies will be stored in your browser only with your consent. You also have the option to opt-out of these cookies. But opting out of some of these cookies may affect your browsing experience.
Necessary Always Enabled

Any cookies that may not be particularly necessary for the website to function and is used specifically to collect user personal data via analytics, ads, other embedded contents are termed as non-necessary cookies. It is mandatory to procure user consent prior to running these cookies on your website.