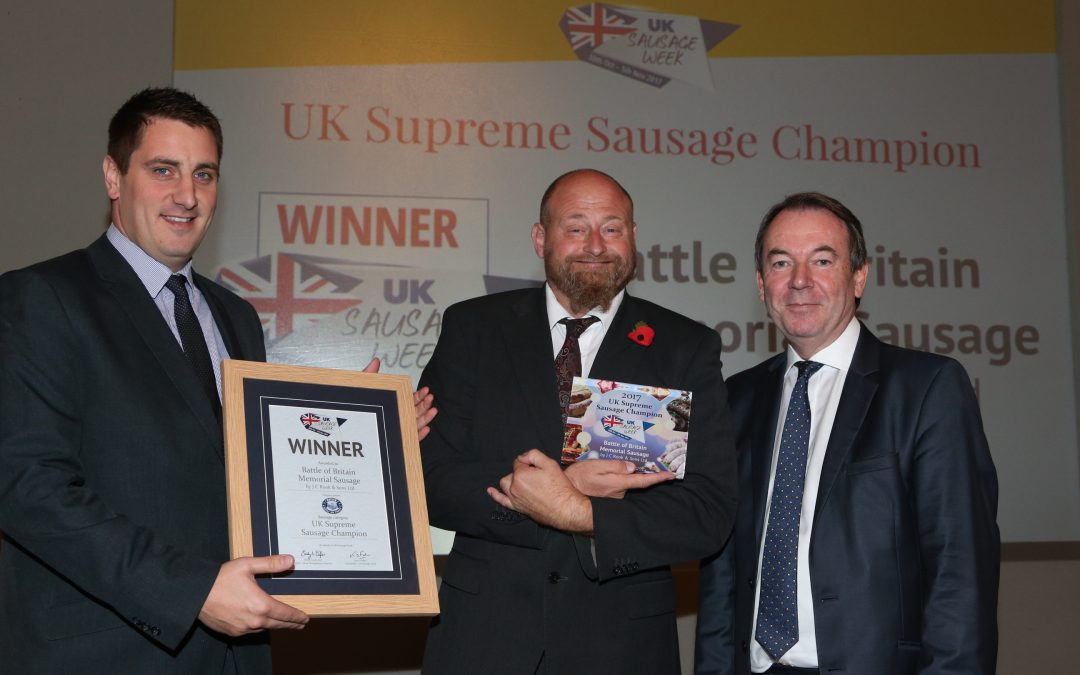 Inspired butcher Andrew Rook in Ramsgate, who was crowned UK Sausage Week’s Supreme Champion with his Battle of Britain Sausage, is raising money in the run up to Remembrance Sunday.

Andrew, of J C Rook & Sons, will be giving 50p for every lb sold to the Battle of Britain Memorial at Capel Le Ferne.

Speaking about the inspiration for his champion sausage Andrew said: “I plucked my inspiration from the air (literally) whilst walking across the white cliffs near Dover. A spitfire, with its exceptional and unique noise flew past.

“Immediately I thought of the last family day out we had as dad, mum brother and sister. I had arranged for my dad’s 65th birthday to go up in a two seater Spitfire (Trainer) from Duxford Airfield. Sadly, a year later my sister succumbed to the dreadful big ”C” – cancer. As part of our family recovery we planted an oak tree as a Memorial to her.

“My thoughts then flitted to the Battle of Britain Memorial just along the Coast at Capel-Le-Ferne, and how important it was for so many families.

“So, using our local Brewers (Shepherd Neame) Spitfire Ale and some Kentish hops almost like you would add a herb, I came up with the Battle of Britain Memorial Sausage.

“But most importantly it is to be sold with 50p/lb going towards the Memorial. It gives us all at J.C. Rook & Sons a real feel good factor on top of the joy of success.”

Andrew added a big thank you to his team: “I have a great team of people working with me to develop and produce the sausages, and I feel, as this is such an Iconic part of World War II history that our loyal customers will support our bid to give a truly generous donation to the Memorial.”

UK Sausage Week 2017 ran from 30th October – 5th November. To find out what went on during the campaign, visit www.uksausageweek.com