Ask me anything says the ‘Prince of Pork’

Professional sausage taster, head judge of UK Sausage Week and CEO of The Institute of Meat Keith Fisher was recently dubbed ‘The Prince of Pork’ on BBC’s Radio 1.

The Scott Mills Daily is on BBC Radio 1 and presenter Scott Mills, together with contributor Chris Stark, have a regular feature where they quiz someone about their specialist interest. In September they found the UK’s favourite ‘sausageologist’ on the line!

Just for a bit of fun, here’s a transcript from the show and how Keith showed them what a masterclass in sausage tasting is looking for. Thanks to BBC Radio 1 for talking bangers in the run-up to UK Sausage Week.

“Hello. How long have you been around sausages then Keith?”

“I’ve been making sausages since I was about 12 years old.

“Is it fair to say Keith you’re a professional sausage taster?”

“Yes, it would be absolutely.”

“This is amazing, what a great honour, I love sausages, you love sausages. The idea that you could be judging sausages on the regular …wow. How many sausages have you eaten in your life do you reckon?

“Particularly in terms of the annual sausage week (now UK Sausage Week), this is its 22nd year this year it averages about 550-600 entries every year so, that works out about 12,500 entries so far!”

“But do you have a go at every sausage?”

“Do you not get tired of them ever?”

“Never! The sausage is one of those most versatile things whether you eat bangers and mash, or sausage and chips or on a barbecue or a sausage sandwich or it’s a toad in the hole. They’ve got something for everything really.

“But he’s not just trying one sausage, it’s not one sausage for life Scott. It’s different every time because he’s testing the different ones.”

“That’s right, when we get entries we ask them to send in a pound for 450g of sausages and if you were to line all 600 entries up side by side there wouldn’t be two the same, not in colour or shape.”

“Yea, I guess if I was having the same old sausage all the time I would get bored but you’re saying you’re trying them all.”

“Yes, undoubtedly the traditional pork sausage is still the most popular out there but we run an innovative category as well where anybody can put any sort of flavour into them and see what the judges come up with. We’ve had Marmite sausages, marmite and pork and as you can guess you either liked them or loathed them!”

“Any other left-field flavours?”

“Let me stop you there Keith. Dessert sausages? I’ve never even imagined that!”

“Last year we had a Christmas pudding one…”

“As long as it’s got some pork in it people can enter what they want. They can enter beef, venison, chicken.”

“Yea, I tried a chicken sausage once it wasn’t for me.”

“Well, the worse one I ever had in my life was a haddock one!”

“No, a fishy sausage, not what you want!” 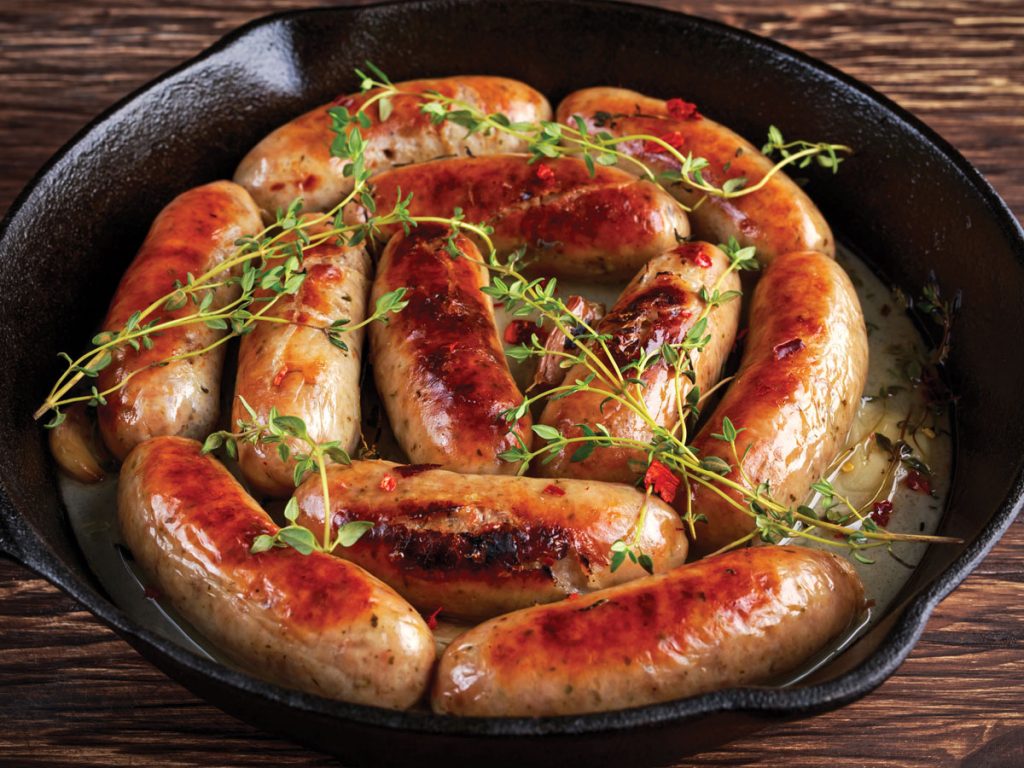 “First of all it’s got to look good. I mean if you look at something and it’s looks awful you’re not going to buy it in the first place. I’m looking at consistent size, I want everyone to be the same, I’m looking for how well it’s filled, is it podgy, is it spongey, I don’t want that.”

“You want them all to be the same length?”

“Absolutely. It doesn’t matter whether they’re all short or all long as long as they are all the same.”

“Got you. Where do you stand on a German sausage? Bratwurst?”

“Well, each to their own really. I’ve been over there and done a lot of tasting in Germany but what we’ve got here are British customers and they like a traditional pork sausage.”

“Now Keith I’m presuming you are never far away from a sausage being a professional sausage taster?”

“I’ve had sausages for lunch today on the barbecue. I’ve got cooked sausages in the fridge, which I’ll probably polish off later.”

“I wonder if for the next part of this interview you could head to the fridge right now and get out one of those cooked sausages.”

“Now, you’ve got the sausages there from the fridge?”

“Yep. I’ve got a couple of sausages on the plate, cold.”

“Right, I’m chewing right now and I’m thinking basically about the texture, the taste and smell that’s coming through. Is it juicy, you don’t want something that’s too dry on the palette.

“Well. I probably do more than that because what I’m talking about now is just for UK Sausage Week, which is in the last week of October, beginning of November.”

“I can hear you salivating on that sausage Keith.”

“It’s very nice but I’m probably full up from lunchtime but I’m still managing to eat this one as well!”

“So how many a day are you having?”

“Well, most days I’ll have a couple.”

“Incredible! And you never get bored?”

“Never ever. Unless you go to the same place who make them consistently. I know lots and lots of independent retail butchers who make superb sausages and when I’m going around I like to buy some from each of them really to try them.”

“This has really got my imagination running wild I should say Keith. Maybe in line with Sausage Week we should do some kind of SausageFest? Sounds like the kinda thing you might be into and therefore others.”

“What would that involve?”

“I guess it would just be our own festival. Maybe we just encourage everyone to get involved with sausages.”

“Well, particularly the independent sector, the retail trade, butchers they would be really interested in participating and would be given the opportunity to showcase some of the more unusual and types of flavours that they do.”

“Absolutely, if you want me as chief judge, I’m there!”